How Southampton Hospital Came to Be 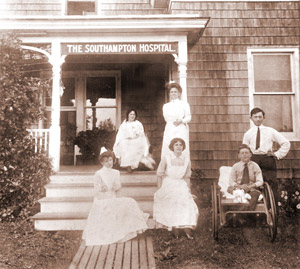 In 1908, two local physicians, Drs. Wheelwright and Schenck, were called to treat a patient on the outskirts of Southampton Village. The case was so urgent they couldn’t take time to move the patient to the closest hospital. So, by the light of a kerosene lamp in a small attic room, they operated to save the life of a woman who, in time, fully recovered.

That ordeal convinced the doctors that Southampton needed a place where emergency operations could be performed in safety. They discussed the problem with other local physicians and, after several months, they were all determined to create a proper space for “modern” healthcare, complete with a district or public health nurse who would tend to its patients. At a meeting on August 22, 1908, those attending agreed to rent space for a nurse and a dispen­sary. 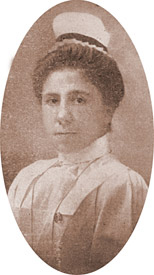 Nurse Charlotte Lillywhite was hired and moved into one of two rooms rented in the Goodale house on Hampton Road. The adjoining second room was fitted as an emergency room. The new venture was so successful that there soon were cots lining the hall to accommodate patients. Three more rooms were rented on the third floor, but within a few months, plans were underway for a permanent hospital.

In 1909, the now-incorporated Southampton Hospital Association bought the Hervey J. Topping house on the corner of Lewis Street and Meeting House Lane, complete with adjoining land for a future hospital building. The house was renovated, with much of the labor donated by community members. Generous financial support came from local and summer residents alike. Still, demands for care and space con­tinued to grow, and another house nearby had to be rented to accommodate the overflow.

In 1911, the Southampton Hospital Association’s board of governors decided to build a new, fireproof hospital on the vacant land they had bought. Summer colonist George C. Clark was named to solicit funds from the summer folk, and J. W. Fletcher Howell was to contact local residents. Samuel Parrish offered a 2-1/2 acre tract of land on Old Town Road, from Meeting House Lane to Herrick Road, and plans were changed to build on the new lot instead of the old one.

Donations of nearly $35,000 were made to the building fund and famed society architect T. Markoe Robertson donated the plans. Work began late in 1911, and the new hospital opened to the public on Washington's Birthday, 1913. The building and equipment cost about $60,000. It was fireproof, with thoroughly up-to-date furnishings and equipment.

The original 1913 building was designed to be able to grow – and so it has, along with the community it serves. Centrally located in the village of Southampton, two hours from New York City, the Hospital is the healthcare hub for an ethnically and financially diverse population of year-round residents, second homeowners and vacationers. That original brick building is scarcely recognizable for all its additions and improvements, but the community spirit that first built it thrives in the care the Hospital offers today.

Building Additions Through the Years 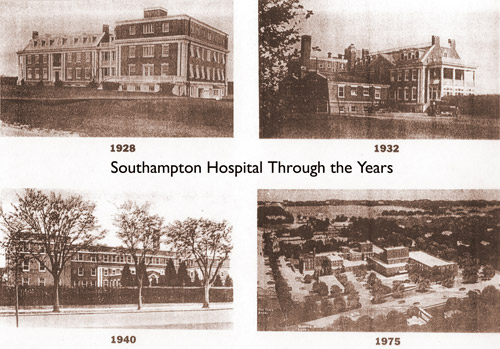