Southampton, NY—Responsible disposal of unwanted, expired and unused medications has been made more convenient for residents of Sag Harbor and surrounding areas thanks to the generous contributions to their community by pharmacist Jeff Yohai and Southampton Hospital. Robert Chaloner, President and CEO of Southampton Hospital, announced that Southampton Hospital’s sponsorship has made possible a pharmaceutical collection receptacle now operational at Sag Harbor Pharmacy, 120 Main Street, Sag Harbor.

“Southampton Hospital is proud to sponsor the Big Red Med Box at Sag Harbor Pharmacy to enable responsible disposal of unwanted medications. Water quality is a major concern for Long Island and we need to protect our drinking water from many kinds of potential contaminants, including unwanted medications that might otherwise be flushed into our groundwater,” says Mr. Chaloner.

“The key to a successful program is making medication disposal free, confidential and, most importantly, convenient,” says Thomas McAbee, Executive Director of the Lloyd Magothy Water Trust, Inc., which supplied the collection receptacle.

Pharmacist Jeff Yohai, the new owner of Sag Harbor Pharmacy, said, “Responsible disposal of unwanted medications helps keep old medications out of our drinking water and also prevents prescription drug abuse. Having the Big Red Med Disposal Box here in Sag Harbor Pharmacy is a great benefit for our community. We need to do our best to keep old prescription medications out of the hands of small children who might accidentally ingest them, and out of the hands of any teens who might seek to use medications for non-medical use. Getting rid of unwanted medications that are unnecessarily stored in household medicine cabinets reduces the chance of prescription drug abuse. For now, we will collect only non-controlled medications until the New York State Bureau of Narcotics updates their regulations.”

The Big Red Med Disposal Box at the Sag Harbor Pharmacy meets the Drug Enforcement Administration’s regulations to implement the Secure and Responsible Drug Disposal Act of 2010. By taking the lead in Sag Harbor, Jeff Yohai and Robert Chaloner hope that their collaboration for responsible medication disposal at Sag Harbor Pharmacy will stimulate other pharmacies to sponsor disposal boxes and help expand this valuable program in other communities. McAbee encourages everyone to patronize those businesses that step up to prevent prescription drug abuse and keep medications out of our drinking water. Potential benefactors should contact Tom McAbee at tommcabee@gmail.com or (631) 353-3435. 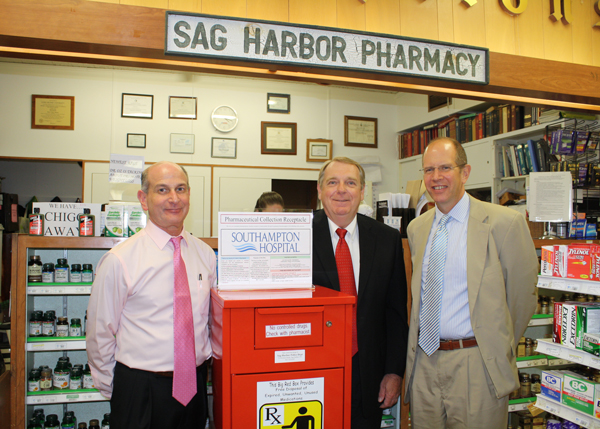