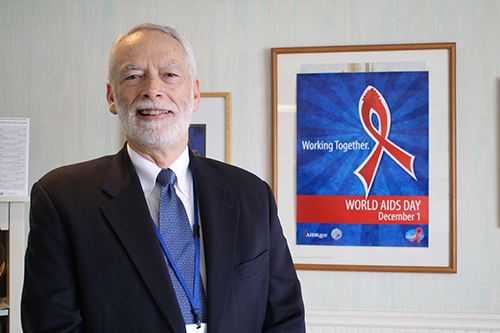 fight against AIDS. This year, the Nassau-Suffolk HIV Health Services Planning Council’s World AIDS Day observance will be held on Friday, December 2 from 6:30 - 10:30 p.m.   at Carlyle on the Green in Farmingdale.

Michael Collins, Program Director of Southampton Hospital’s David E. Rogers, MD Center for HIV/AIDS Care, will be one of two recipients of the Distinguished Provider of the Year Award for his dedication, commitment and positive impact on those infected and affected by HIV/AIDS on Long Island.

New York State has implemented a three-point plan to end the AIDS epidemic by the end of 2020. As of December 2015, there were over 5,400 individuals living with HIV/AIDS on Long Island. Over half of those individuals were helped by the Ryan White Part A Program on Long Island, many of them at Southampton Hospital’s David E. Rogers, MD Center for HIV/AIDS Care.