Southampton, NY—Many say staying active is often key to living a long and healthy life, and that certainly is the case for Stony Brook Southampton Hospital Volunteer Josephine Forestano, who celebrates her 95th birthday on February 1.

Ms. Forestano, affectionately known as Josie, has been volunteering at the Southampton Hospital Foundation Thrift Shop since 2008. She comes in every Friday to greet customers and sort donations, and to offer a hand with other tasks in any way she can. She has also put her passion for knitting and crocheting to work by making baby hats that she regularly donates to the Hospital’s Kathleen D. Allen Maternity Center. When she’s not giving back to the Hospital, Ms. Forestano is volunteering at the Basilica of the Sacred Hearts of Jesus and Mary in Southampton, and at the food pantry at Human Resources of the Hamptons.

Ms. Forestano grew up in New York City and was the daughter of Sicilian immigrants. As a young woman during World War II, she worked in a government ammunition factory for the military where she earned the nickname “Josie the Riveter.” After marrying her husband Joseph, the couple moved out to Long Island and had three children: Michael, Nanette, and Richard. They eventually moved out to Southampton after Mr. Forestano retired.

Ms. Forestano first began volunteering within the community when her husband lived at the Hamptons Center for Rehabilitation and Nursing, as she would visit every day and helped out with the other residents there. When he passed away in 2006, she decided to would be a good use of her time to give back to others in need by volunteering. She also began attending the Bridgehampton Senior Center and is involved in activities there as well.

When asked what her secret to life is, Ms. Forestano says, “It’s love—all you need is love.” 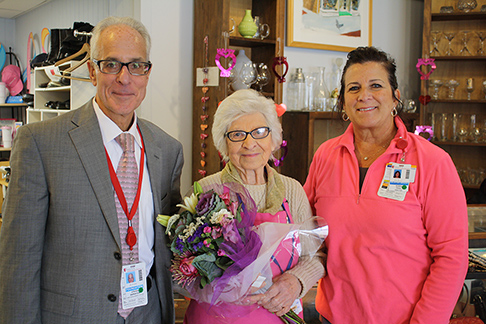